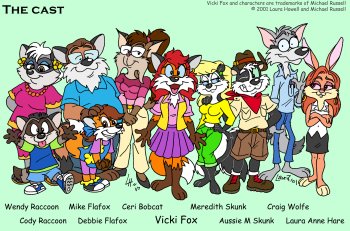 I bet you thought there was just little ol' me.

Well, no. I have friends, family, and co-workers.

Let me introduce you to them.

The following are the primary characters in the comic strip.

My best friend and roommate

The following are relatives who regularly appear in the comic strip. Other relatives make cameo appearances, but they are not part of the regular cast.

Mike's daughter and my cousin

Because my uncle travels, he hired a full-time nanny to take care of Debbie. Her and her son are considered part of the family.

The following are co-workers at the magazine publisher where I work.

The editor, and friend

The receptionist and museum owner

Extra characters that often appear in the comic strip.

The following image shows how I'm related to Mike, Debbie, and Zephy. The names in red are family members who have passed away.

The following image shows how to construct the major characters in the cast.

Unless otherwise stated, the characters were created by Michael Russell with input from KeV Beeley.

Laura Howell is mostly responsible for the appearance of my cast. I am very much in her debt!